My mom has been speaking for quite a while about going to Saundatti to the Renuka Mata (who is our "Kulaswamini") temple.  Since 2nd was a public holiday a plan quickly got formed.  Since i rarely get out for religious trips, mom also made plans for a puja at Narsobachi Wadi near Sangli.

Bhau came down to pune on sunday, 27th, just a few hours after dd and i returned from our mahabaleshwar trip.  Mom had demanded his presence for Dassera on monday.  On tuesday bhau, mom and dad drove to kolhapur, while rashmi, chiu and i moved to my in-law's place at karve nagar.

Thursday evening we left for sangli in a hired tavera and reached narsobachi wadi by 10pm, approx a couple of hours after the others had reached from kolhapur.  We stayed at Ved Bhavan, a nice two-storied structure constructed by Sharad Upadhyay (Rashi Chakra) for conducting puja's, yagnya's, philosophical discourses, etc.  The pic below shows the hall in which the puja was done; there is also a yagnya-kund there.  Pittya had also come down in the car, and after a spicy dinner prepared by the caretaker couple, we chatted for a while before hitting the sack. 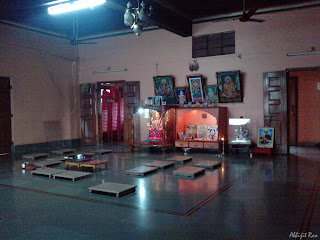 The puja started early morning the next day and was over just before noon.  Then we took darshan at the beautiful Dutta temple on the Krishna riverbank.  After that it was a half hour drive to baby (!) atya's place at sangli.  In the evening we went to the famous Ganapati temple in the heart of sangli; it is really worth seeing.  It is quite spacious and clean, with a beautiful idol that can be seen even from a few km outside.

Since the car couldn't seat all of us, dad and pittya took a bus to kolhapur while we drove down.  Rashmi and i were visiting after 5 years and in fact we were seeing yogya's wife and kids for the first time.  We hogged on some fantastic khichdi made by Rita maushi and then relaxed.  The whole attention was on the two Aditi's, both looking absolutely adorable.  A.Rao is 1yr 1m old, while A.Chavan is 1yr 9m old. 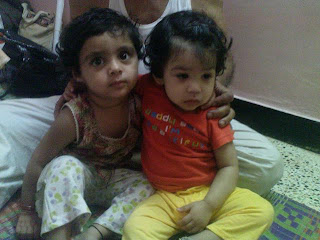 We left early next morning for saundatti, the car totally weighed down by 5 'healthy' individuals and a completely packed boot.  It had started raining heavily in many parts of maharashtra and initially it was very tough going because our windshield wipers were quite screwed up.  Luckily we managed to get the drivers side wiper changed at a small village on the way.

We had been told that the saundatti temple is closed from 1-4pm everyday, and so we took a small detour to see the Gokak waterfall.  What a sight!  Fed by the heavy downpour upstream, the waterfall looked like an angry monster.  You can check out a couple of great videos on my brothers blog on this link:
http://blog.quasi.in/2009/10/waterfall-at-gokak.html 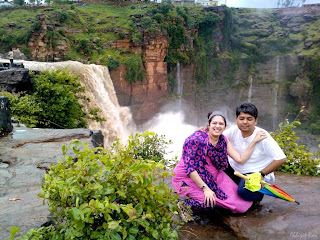 There is a rope bridge on the river just before the waterfall.  It seems to be quite strong, reinforced by steel cables, and one concrete pillar roughly halfway across, but you have to walk on wooden planks which have gaps between them and the whole bloody bridge sways as you walk across.  It was very scary and real good fun.  The roar of the waterfall and the sight of the dark muddy river thundering past below makes it a nicely terrifying experience.  My dad had given us strict instructions not to go on the bridge, and so bhau, rashmi and I promptly went.  We went halfway and stopped at the pillar to enjoy the sight.  Then rashmi and I actually begged bhau to go back to the riverbank and to a nice small temple (see pic below) overlooking the waterfall and click a photo of us standing on the bridge.  Poor guy obliged.  :-)
You can barely make us out on the bridge though  :-( 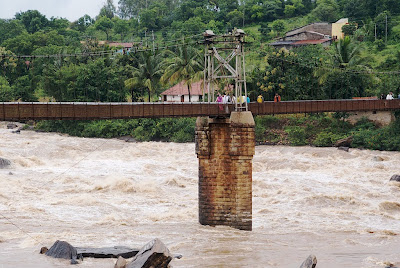 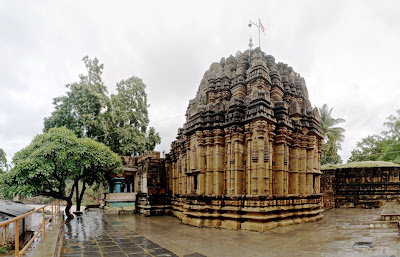 We ended up spending too much time at gokak and reached saundatti by 4:30pm.  On the way one of my uncles called from kolhapur to inform us that there was a really bad flood situation in karnataka and south maharashtra, due to which many roads near and around belgaun had been closed off.  Saundatti is approx 65kms from belgaun and we bacame a bit apprehensive, but pushed on.  There was water everywhere in the fields on both sides of the road, and the small streams we crossed were full.

On reaching we were shocked to find that the temple was not closed in the afternoon and had just been closed at 4pm!  We somehow talked our way into getting inside for a quick darshan.  There were only priests inside, bathing the goddess and starting the puja.  We got real nice almost exclusive darshan for a few mins and then we had to get out.  There was a brief bad scene when some super aggressive beggar women started harrassing my mom for money, but we escaped.  The pic below shows the mandir kalash. 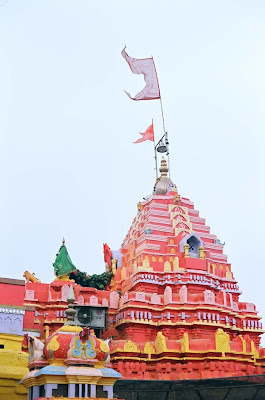 We were all really tired by now and the drive back seemed to stretch on and on.  The heavy rain wasn't helping at all.  I had been driving all the way since 7am and by the time we reached the highway near belgaun i suddenly started feeling damn exhausted and handed over the wheel to bhau.  We reached kolhapur by 11pm, extremely fatigued, and just crashed.

The next morning we woke up late, had a superb breakfast of some speacial wada's pittya got for us.  Then we were off to the famous Ambabai temple for darshan.  After that were visits to Avi mama's and Nilu mama's places, and then we left for pune.  Reached home late at night, with the wonderful prospect of monday morning hovering just a few hours away....

The whole family of 6 had gone out together after ages.  Overall a great trip.
Posted by Vivek Rao at 10:35 PM

I liked the way you have described everything, I am sure you did not have missed anything here :). These kind of posts are really important for ourselves than anybody else.

Aditi must have enjoyed her (i think first) trip, haven't she ?

And yes, one observation, do you purposely don't justify the text in the post ??

You're right, this post was more for myself rather than anyone else. Also for bhau and rash cause they were there too.

Chiu enjoyed the trip, but she also got damn irritated with being confined to the car for such long stretches. She must be thinking what are these idiots doing in this small moving box instead of playing outside...

Yeah, i purposely dont keep the text justified. Tried it for the first post, but found it to be too serious looking. I've kept it justified only for the short story i posted.

this _is_ a diary, the blog is. it is excellent revisiting in the years to come. nice read. it was a hectic trip, but good fun.