Dd and I spoke over phone on friday and suddenly decided to do a quick mahabaleshwar trip on sat-sun.  I just wanted to get out for a while.  He was on a months break between jobs and was actually quite bored with sitting at home.  Understandable, since his work life is usually quite exciting: stressful days with heartbeats linked to the markets, followed by evenings at some uber-expensive bar, "servicing" some client or the other.

It was a short trip; he picked me up at pune at noon on saturday, and we were back in pune by 7pm on sunday.  The best thing was that we had no agenda whatsoever, and just did whatever we felt like.  I think we were just driving all the time, but since the roads were great throughout the trip, that was very enjoyable.

At night we boozed (dont we always) and had a nice looong chat.  We were anyways jabbering away during the whole trip as a good drive, like booze, makes for good conversation.  With dd it is always familiar territory and we probably said a lot of stuff that would have already been spoken before on some prior occassion.  We are both major cribbers, and most of our topics have that common thread running through!

I hate to admit this, but we ended up doing a lot of romantic stuff together:
- we took a horse carriage ride on the tableland
- we picked a motel room with a bathtub
- we ate chocolate fudge from one plate
- we shopped in the mahabaleshwar market (not hand in hand)
- and to top it all, we went boating

That horse carriage ride was such a big fraud.  We were promised to be taken on a 45 minute ride and shown 10 "points".  The smart-ass carriage boy we got bombarded us with arbit bollywood trivia related to pachgani and mahabaleshwar.  "....amir khan came out of the water here....raj kapoor had a sexy scene there....karishma and amir kissed under that tree...." etc etc.  And from time to time he kept turning back with a wicked grin and asking us "You married?  All married couples come here and enjoy!".  The bas*&%!
He must have said 'enjoy' atleast a 100 times.

He finished off the ten points in the first 5 mins and completed the round trip in 25.  When we asked about this he asked us to spend 20 mins walking around clicking pics like other tourists.  Actually speaking we weren't all that sad....we had anyways been just hanging on for dear life as the carriage had been bucking around like a wild bull in heat.  I dont recommend that ride to any fellow spondylitis sufferer.

We had one amazing find in the trip though.  The next day, on the way back, we stopped at Parsi Point near pachgani to take in the beautiful view and hog on some super delicious wada pav.  The view from that point is that of a flat piece of land surrounded by mountains on 3 sides and a lake on the 4th.  Looking down, we noticed a surprisingly large temple approx in the middle.  Feeling curious we decided to explore.

We took a small by road from Vai and made our way towards Chikligaon, a small hamlet where the temple is situated.  On the way we passed "Dhom Dam", where entry is absolutely forbidden since the terrorist attack on the Taj.  Beyond the dam is a Boat Club.  The name is misleading as there is actually just a tiny jetty-like structure and a couple of small motor boats.  The caretaker of the neighbouring godown takes tourists on joy rides on these boats.  I'm shit scared of water, but dd forced me into a life jacket, and then into a small motor boat for a long ride on the lake. 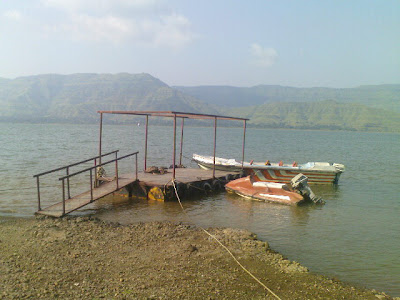 The view from that boat club is mind blowing!  Pachgani and mahabaleshwar are really beautiful and all that, but this view was phenomenal.  Amazingly picturesque and serene.  Dd and I will probably always go there on every trip to mahabaleshwar.

A few km onwards, we reached the temple, which is really very large as compared to the small hamlets that surround it.  Chatted with a talkative priest there, had darshan, clicked a few snaps and we turned back. 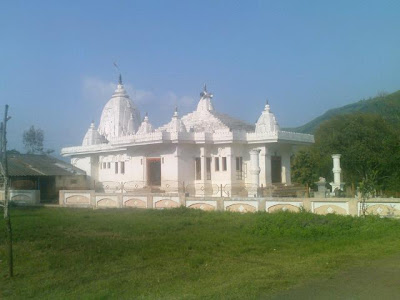 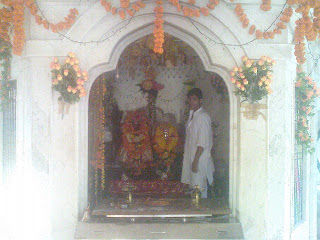 We reached pune by around 7pm and hogged on lots of chaat outside my building.  That was the first chaat i had after shifting to pune and it felt great.  What a way to end a great trip.
Posted by Vivek Rao at 7:26 PM

These unplanned things with no particular agenda are the best.

The romantic stuff is a little disturbing. Not that there's anything wrong with it though. I can imagine the carriage boy telling the other tourists "this is a very liberal place, we get all sorts of couples here".

Didn't my boss see us eat ice-cream off one plate a few months ago? You are nothing but trouble.

Sounds like a good f'in trip man. Short n' sweet. Just like mine was two days ago ;-)

i think i bring out the sexuality in men instead of women...

yours was a nice trip here dude. true it was really short, but i had fun. i look forward to you, nips and lejji coming down soon.

Dammm, you guys did lot of stuff in just a days time. I am going to send this post to our gang and tell them, boss next time we don't go to mahabaleshwar or anywhere for just boozing.
Great stuff and there was no doubt you had great fun without your wives, hehe.

I feel jealous... DD seems to be replacing me in the romantic stuff with Vivek...

Percy ... having fun without wives... I will tell Dada to leave you home for all future trips......

hehe..! Stop teasing dada and seriously start considering that he is going to get married. Its high time now.

chup raho tum log. but m'baleshwar is a fucking awesome place .. all around. I love it. :)

The gay stuff, well that is expected. :)

saala harami, when I used to do this random stuff, you used to laff at me. ab bol. it's more fun this way sometimes. :) no agenda. rather, 'anjoy' is the only agenda. we should step back and pay homage to the gujjus who pioneered this concept. :P

That was a fun trip. Next time let's trek all the way down to Dhom Dam. That should be really fun.