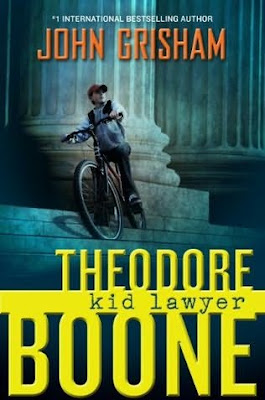 This is Grisham's 24th novel.  And a bad one.  I have read 5 of his novels before this one, and have liked all of them.  A Time to Kill, The Firm and The Client were really amazing.  Extremely gripping plots, unexpected twists and turns, and superb writing.  Even The Pelican Brief and The Broker were quite good.  Going on past experience I picked up Boone with a lot of anticipation; and was completely disappointed.

The writing was average, at best.  There was no plot at all.  Even after reading 100 pages i was left waiting for some semblance of a plot to develop.  An overly simple and straightforward story line, with no twists (other than the one where the surprise witness turns up; but that's the whole premise of the book anyways, even mentioned on the back cover), half-baked characters and a feeble ending.  And I thought Grisham was into legal suspense thrillers....

The story is about a 13 year old boy, Theo, who dreams of becoming  a famous trial lawyer or a judge.  Both his parents are lawyers, and he spends most of his spare time wandering about the courthouse, getting to know all the lawyers, secretaries, bailiffs, etc.  He also hacks into various law databases and systems to help out his school buddies in legal matters.  He is excitedly following a murder trial when he gets to know of a witness who's testimony would completely change the trial outcome.  Sworn to secrecy, but still desperate to see the murderer punished, he finds himself in a tough spot.

The other thing which really irked me is this foray into the Young Adult Fiction genre.  Many other authors are doing this because this is where the money is today.  Its like a critical mass of youngsters have suddenly started reading again, and you find so many of these new books claiming 'bestseller' status.  Some recent names are the all-too-obvious Harry Potter series, the Artemis Fowl series, the Twilight series, the Bartimaeus Trilogy, etc etc.  Does Grisham need to do this?

Even giving him due consideration for wanting to reach out to a much younger audience and doing something different, it is not pardonable that he hasn't tried to understand this segment better.  Todays tweens and teenagers are quite complex creatures, who can handle complicated story-lines (see the later potter novels for example), who are already into relationships (it is absurd to describe a 13 year old who is not into girls - this is far fetched even in India!), who are reasonably mature individuals for that age...and want to be treated as such.  Blyton era innocence cant fly now.

To top it off, the ending seems to be designed for a sequel.  Or maybe we are to see many more Theodore Boone books.  I really hope not.
Posted by Vivek Rao at 5:51 PM

is it bad? i try to read any novel of Grisham, painted house, bleachers, street lawyer, runaway jury, firm, time to kill, broker all good novels... thanks for the caution

In that case, would love to know your opinion if you end up reading it anyways...

I don't read. You knew that. And I'm sure you're gonna roll your eyes when I tell you that I watched the film adaptations of A Time to Kill, The Firm, The Client and The Pelican Brief. Loved 'em all. But yeah, nothing like the book, you will say!

Good point about the move into children's books and going where the moolah is. Dunno man, you didn't like the book, but this could go on to be the next big thing on the big screen. Package it right, and bam!

Why don't you put up your thoughts on English, August later? Now there's stuff I can relate to.

Of late, Grisham has been brushing things up from his old manuscripts in the attic! This probably is the one he wrote during his teens.

@ Boozy: Even i liked the film adaptations, but nothing like the books, i say. :)

I'm sure this could become a movie yaar. The young crowd are great money earners for production houses. All i can say is i wont watch it!

I've been wanting to do a book review on English, August and a movie review on Lock Stock and Two Smokin Barrels, but gotta do those nicely man! They are my absolute favorites. One day...

hahaha good one, Nona! And thanks.

why there is not a word about this book on the John's official webpage?

hey, i didn't know that! and after i saw your comment i checked out his official site and you are right, there is absolutely no mention. very strange...